Return to All Posts 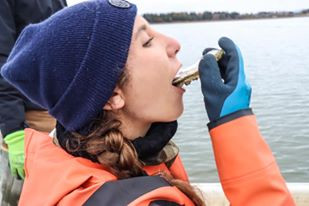 Monday Oct. 28 Between 3:00 and 8:30 PM Extreme low tides Mid October John let me know to clear my calendar for Monday, October 28th because we were heading to Mount Desert Island Oysters because they needed as many hands on deck - or on the mud flats as possible. Brian Harvey, the owner and grower needed to move more than 1 million Maine oysters off of his lease site in just 4 days. You might be wondering how one might move more than a million oysters and why in such a short time frame, and initially, I was thinking the very same thing. The 5 acre lease site that is home to Mount Desert Island Oysters is only accessible at the most extreme tides of the month because he uses the growing method of ground seeding oysters. For the first year of life his oysters are grown in floating bags on the surface of the water and in the spring of the following year Brian and his team empty the bags over the 20 + foot long rows of netting that lay on the bottom for them to grow. In these extreme tides, Brian and his team work doubles- both tides for the few days they have, and they collect any oysters that have moved off the netting, gather oysters for market and they also gather oysters to be tumbled as well. They then return tumbled oysters not heading market to the site and allow them to continue to grow. At this time of year, all of his oysters are moved for overwintering at another lease site that is more accessible in the winter months, when he continues to gather market oysters and monitor his crop.
Our experience on the cool autumn night was unlike any other farm I had been to or worked on. We arrived for the second low tide of the day and our crew made our way by boat out to his site around 3:30 in the afternoon. Upon arrival we had a short while longer to wait for the last of the tide to go out. As we watched the mudflats become more and more exposed, Brian grabbed a shovel and began gathering some oysters off the bottom and shucking them for us with his special side oyster shuck technique. A quick last snack before getting to work and what a good one, to say the least. Once the water was less than a foot deep we all jumped in. My favorite quote of the night came at this moment from Brian when he said “if you feel yourself about to fall in the mud, you need to yell out." Jacqueline asked "So people know where you are incase it is dark?" Brian responded "No, so we can laugh at you."
We all chuckled and I immediately began sinking into the mud as we worked to place lobster crates around the site that would later be filled with oysters. The crates are much easier to float than they are to drag across the mud, so I was happy that we began while we still had some water left to work with. The tide continued to flow out and the boats settled on the mud and we really got to work. Our goal was to collect any and all oysters that were settled between or near the nets and toss them back on. After checking each side of the nets, two people would pick up the end netting and roll the oysters towards the middle. Once we had a sizeable amount we would fill a lobster crate and repeat. This continued throughout the entire low tide. We also collected all the netting and gear to be brought back to land for the winter. Our eyes adjusted as the sun went down but we surrendered to headlamps by 6:30 pm. The night had fallen but we weren’t done yet. Meaning we weren’t done falling, or at least I wasn’t. Unsurprisingly, I yelled out often and generally stayed stuck in the mud long enough for everyone to get a good chuckle, or at the very least a good look. As the clock neared 8:30 the tide began making its way toward us once again. We circled the site, gathering the last of the gear and closing all the crates that would be collected during the next tide. Brian estimated we had collected nearly one third of the sites gear and oysters and that was all that had remained upon our arrival. The last of the work consisted of moving the lobster crates filled with oysters across the water to his winter lease. We loaded up and turned off our headlamps so we could adjust again to the faint moonlight we had. The water was flat calm and we were mesmerized by the phosphorescence we saw on the ride home. Returning to shore was accompanied by the feeling of relief and satisfaction. The work we did was some of the hardest and most rewarding of any time I had spent on an oyster farm. We had just experienced just a small portion of the grime and grit that it takes to farm oysters in these conditions and it is a part of the process that is not always seen or appreciated. Oyster farming can seem so sexy in the summer. You can’t beat a beautiful summer day on the coast of Maine, but I honestly have to say that my cool, wet, autumn evening will be much harder to top.
We would like to thank @thebrinybabe for allowing us to use her photos for this post and thank her for joining us in helping Brian and his team!  If want to buy some fresh Maine oysters for sale we offer Brian's, when we can get them, along with many other varieties shipped fresh and overnight!

On the Farm
Meet The Farmer
Events & Stories
MOC Life